Aspiration to Explore Micro and Nano World , Affinity for SUSTech- Interview with Hu Chengzhi, Assistant Professor in Department of Mechanical and Energy Engineering

During the interview, I have been deeply impressed with Professor Hu Chengzhi’s sparkling eyes in his talk about the coolest robot. He is a vigorous,passionate and persistent youth for his aspiration and ambition. That is why he has been progressive in scientific research and innovation.

Professor Hu had been under the supervisor of Professor Toshio Fukuda, a international renowned scholar in nano-robotics and bio-robotics at Department of Micro-nano Systems Engineering of Nagoya University. After obtaining his doctor degree in 2014, he turned to post-doctoral research with Professor Bradley Nelson, a famous scholar in micro-nano robotics,  at MSRL of ETH Zurich. Professor Hu has been devoted to researches on application of bio-medical engineering, combination advanced robotics technology with micro-nano and electro-mechanical system for micro-fluidic devices, system integration and new micro nano sensors. He has been a pioneer in the fields including application of micro-nano robots,microfluidic chips,biological micro electromechanical systems to biological analysis and detection. His research achievements have been presented in international academic journals such as Lab on a Chip, ACS Nano.

What is such a young and promising professor’s story? 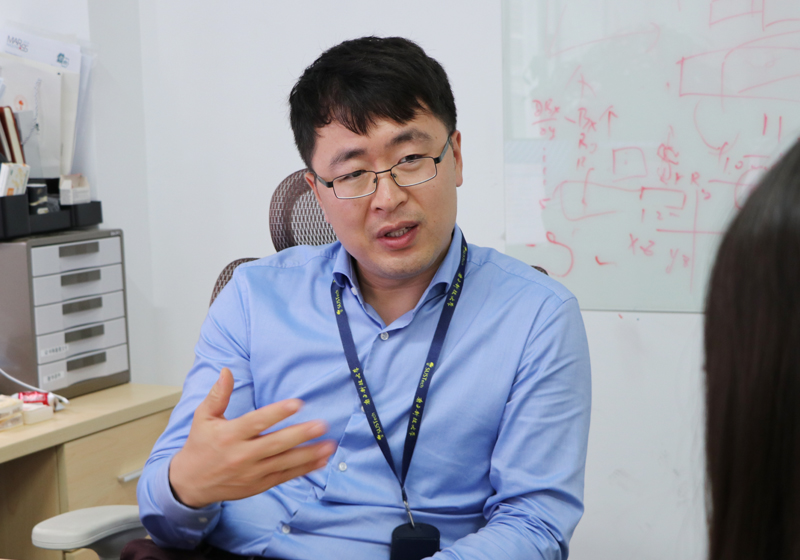 Professor Hu During Interview
Time in Middle and High School: Life without Definition
“The atmosphere for learning was not so good then.”said Professor Hu. “In the beginning, there were about two or three hundred students around me. Yet only thirty or forty upon graduation. Many skipped to make a leaving, Some academic stars who I had been trying my best to catch up with suddenly dropped out.But I held up because of my family background-My parent was teacher. Although I was not sure whether I was excellent student or not, I had a benchmark: keep moving forward and not let myself down.”

Since then, Professor Hu has been devoted to learning and has been trying to be the best in each exam and academic competition on municipal and provincial levels. During his high school, he was an enthusiastic joiner in students’ activities, chairman of students’ union  and was ready for whatever opportunity to enrich him in all aspects. At the thought of excellence,he tells me, “You will be excellent as long as you are progressive to your goal and achieve it.”

“We tend to be puzzled about kaleidoscopic definitions of excellence and became uncertain about where we go and who we would like to be.”He added. “More important thing is to heed our inner voice and to acknowledge our achievements”it is such experience and life philosophy that enable him to be optimistic about inevitable failures and setbacks in his scientific researches.

Time in University: Aspiration to Explore Micro and Nano World
Like many boys, Professor Hu has had a dream of producing robots, thus he decided to advance his study in Department of Mechanical Engineering of Huazhong University of Science and Technology. With his brilliant academic performance, he was recommended to be a postgraduate candidate upon graduation. Yet, he turned to fulfill his dream of studying overseas. Coincidentally, he met a professor from Stanford University with whom he  became associated with micro-nano world. The further he explored, the more attractive this world became to him.Its hottest spots are researches on micro=nano robots and micro-electro-mechanical systems. The research  findings will be widely applied to drug delivery,targeted therapy, minimal invasive surgery,vivo detection and so on. They are also growing connected and integrated with various disciplines with new engineering technologies, theories and inventions emerging on each passing day. Thus, micro-nano technologies have been extending into other fields with opportunities and challenges. More progresses to achieve means more challenges to overcome.

Professor Hu  next talks about the most impressive robot developed by a research group at Harvard University. It is stingray-like and composed of Intelligent materials and more than 200 thousand transgenic  rats’myocardial cells. Stimulated by external light fields, such cells will contract and drive the fish-like robot to swim forward. He considers this robot as a representative achievement from the interdisciplinary  researches. Producing robots traditionally requires the comprehensive and considerable knowledge of electrics, mechanics, automation and computation.At the same time it is necessary to make the most of research findings in other fields to solve related problems.

Professor Hu encourages students in their prime of life to absorb various knowledge as much as possible, utilize all resources available, establish solid interdisciplinary foundations and expand their dimensions. Professor Hu is directing his students in experiments
Career: To SUSTech for Aspiration and Affinity
When it comes to why he join SUSTech, Professor Hu contends that it has ample resources for researches and in particular, a separate management system for research-PI which enables independent and motivated researchers to lead their research groups.

Department of Mechanical and Energy Engineering of SUSTech is more diverse than those of other universities  in  advanced research directions such as robotics, soft material science, precision machining,intelligent manufacturing and new energy. Students are thus able to acquire more interdisciplinary knowledge. For our faculty, the department is a fertile land for their interdisciplinary research cooperation. The department offers integrated and specific programs to arm students with sound knowledge systems of mathematics and science. Many programs are project-based and helpful for students to improve their practical skills required in real engineering world.

“I admire you for having so ample academic resources.”Professor Hu smiled. He motivates students to make the most of them and to participate at desirable practicums, for example, join research groups for tutorial sessions and utilize research facilities. he emphasizes that precious time in SUSTech waits for no man, during which students need to understand themselves, shape their personalities before they become the true self.

Professor Hu and His Students in the Lab
Identity Transformation: From Student to Teacher
For Professor Hu, the research experiences in Japan and Switzerland are fruitful and impressive. In his eyes, research atmosphere in Japan requires diligence while research atmosphere in Switzerland calls for autonomy and self-discipline. Both of them are deeply rooted in their cultures and their nationals. So, he brings for his laboratory a harmony in diversity in which all participants have opportunities to work for their ideas under his guidance and with discussion before they work out each critical point during researches.

Professor Hu teaches his students as Professor Toshio Fukuda (elected as IEEE Chairman in 2018) does. This hard-working scholar often asks his students progressive questions in order to motivate them to find out research questions, innovative points and their significance. He also embodies his students with international visions that encompass different thoughts. With what Professor Toshio Fukuda teaches him, Professor Hu gives his students opportunities to grow up and to attend top international conferences for communication with exceptional scholars and experts.many of whom are also invited to SUSTech to give lectures and organize forums so that his research groups keep updated with the research trends.

As a famous saying goes that where there is a will, there is a way up to the top research, we believe that Professor Hu and his team are as always to achieve more progress and more brilliant feats with confidence and passion in SUSTech.